One day with our electrical production department wiring the RGM-G

After completion of the first work of our industrial mechanics, the colleagues from the electrical production can already work on the tire uniformity measuring machine, type RGM-G. This is because their work begins while the mechanical assembly is still in full swing.

As preparatory measures, sub-assemblies such as the motors are pre-installed in advance. The sub-aggregates are connected after the completion of the first work steps.

Then, in addition to the switch cabinet and the cable markers, the labeling of the cables is prepared and the cable duct is set up. This work takes about 2 weeks for a machine of this size. With a maximum cable length of 20 meters, the cable paths are significantly longer on the RGM-G than on a standard Hofmann machine. Thus, it lives up to its name extension 'G' for 'Giant'.

In addition, actuators, sensors, field bus components, safety technology and electronic systems are wired via state-of-the-art connection variants such as Drive-Cliq and IO-Link. It is of great importance that the cable paths are set correctly by the electrical production staff and that the coordination with our electrical design department is carried out. This is because the cable markings and any changes to the control cabinet must also be included in the documentation of the control cabinet at all times. This increases transparency and facilitates the assembly of future identical machines.

What is special for the electrical production staff is the size and dimension of the RGM-G.  Its height makes assembly an exciting challenge for the colleagues. Since this is a special machine, the work paths must be more flexible than usual at some points. However, this makes such a project more interesting and fascinating.

As soon as the work is completed, the plant is handed over to the commissioning department for further processing. The impressions of this department you will get in our next part of the series: "One day with our...".

We are pleased to have gained a fascinating insight into the work of our electrical production staff at Hofmann today. We thank our colleagues for the shoulder view and the exciting impressions. 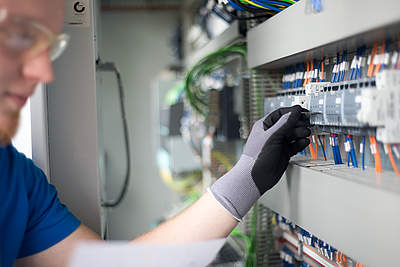 We store technically necessary cookies, without which the operation of the site is not possible. In order to provide you with a better user experience on our website, we would also like to evaluate anonymous analysis data. Which tools we use for this purpose and further information can be found in our Privacy Policy

On our website you will find interesting videos and maps hosted on YouTube/Google Maps. The videos and maps are used without a cookie, but data is still loaded from google servers, which means that your surfing behaviour can be recorded by Google.